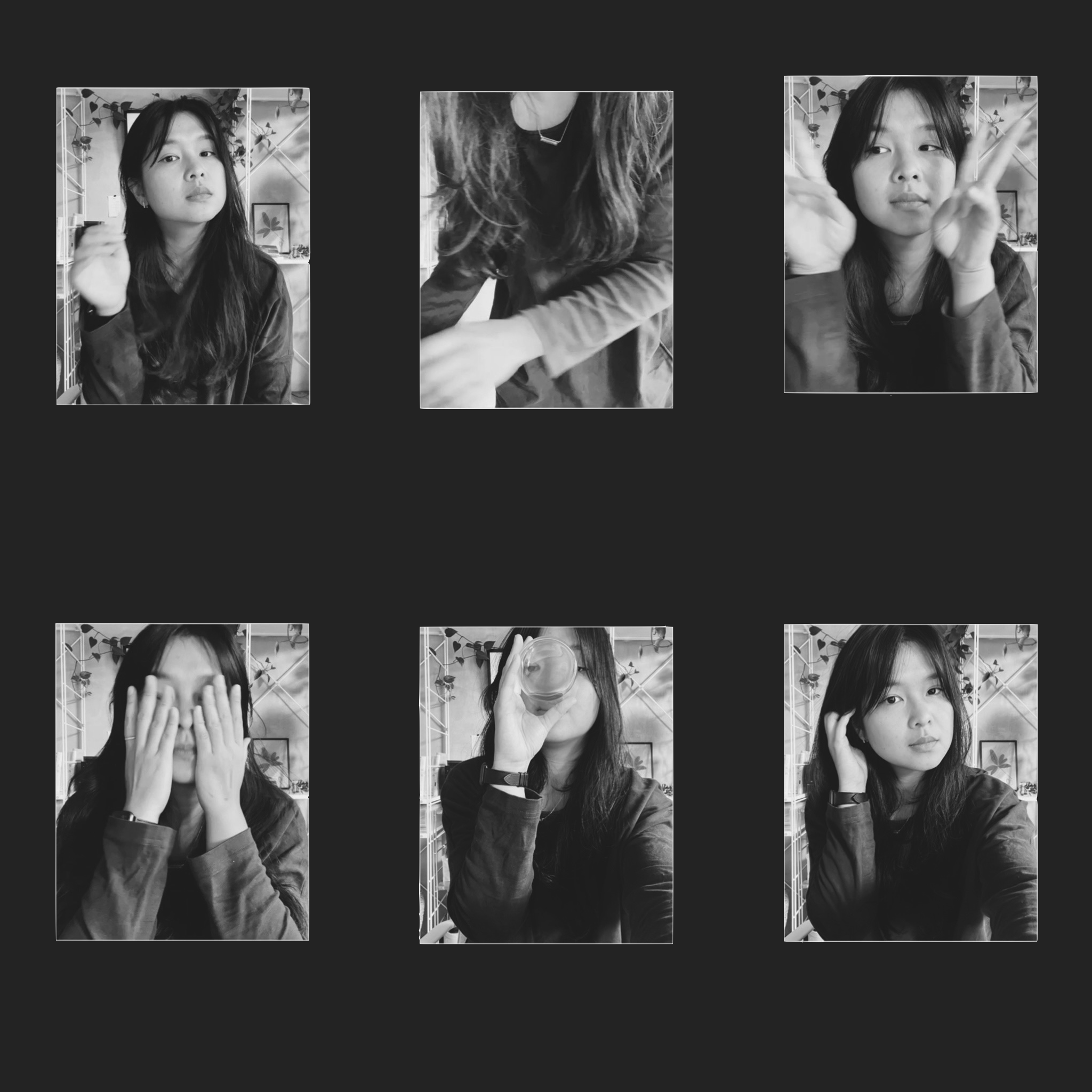 Mu-An. Taiwanese. She/Her. Unfortunately straight. 33. Based in Taipei. Perpetually single. In an ideal world I would live on another continent at least half of the time yearly.

I have a website that links to other places and shows you things I care deeply about.

I own this domain (single.fyi) because dating apps are a scam. I don't like the way they force us to present myself. HERE WE MAKE THE RULES.

← this is pure vanity.
(Want this on your website? check out this fun project I made called OpenHeart)

I'd love to have more single friends in their 30s who are some kind of nerds. I spend most of my free time writing code, playing video games, spending too much money on furniture, and have music playing almost every waking second.

I am not looking for romantic relationships. I am terrible at dating, and there are too many other skills in life I'd rather spend my limited 10k-hours on; ones I get to control most of the variables for success.

I hate to entertain this idea, but there might be a chance that I am a control freak, much like my mother.

If you're in the market for a distant friend though, in terms of physical distance and communication interval, I might be one of the best there are.

Why does this exist then?

It takes too long, and it is too difficult, to confidently, die peacefully, alone. <fun-fact>


Would extinction be so bad?
Given the amount of suffering on Earth, the value of the continued existence of the planet is an open question. (Read)

What friends had said about me in private

These are quoted without consent.

This was at a wedding I wasn't at. I was told he was very high and very drunk at that moment.

Friend sometimes thinks I am ever so correct on things.

I responded with: "You are a friend. Thank you." 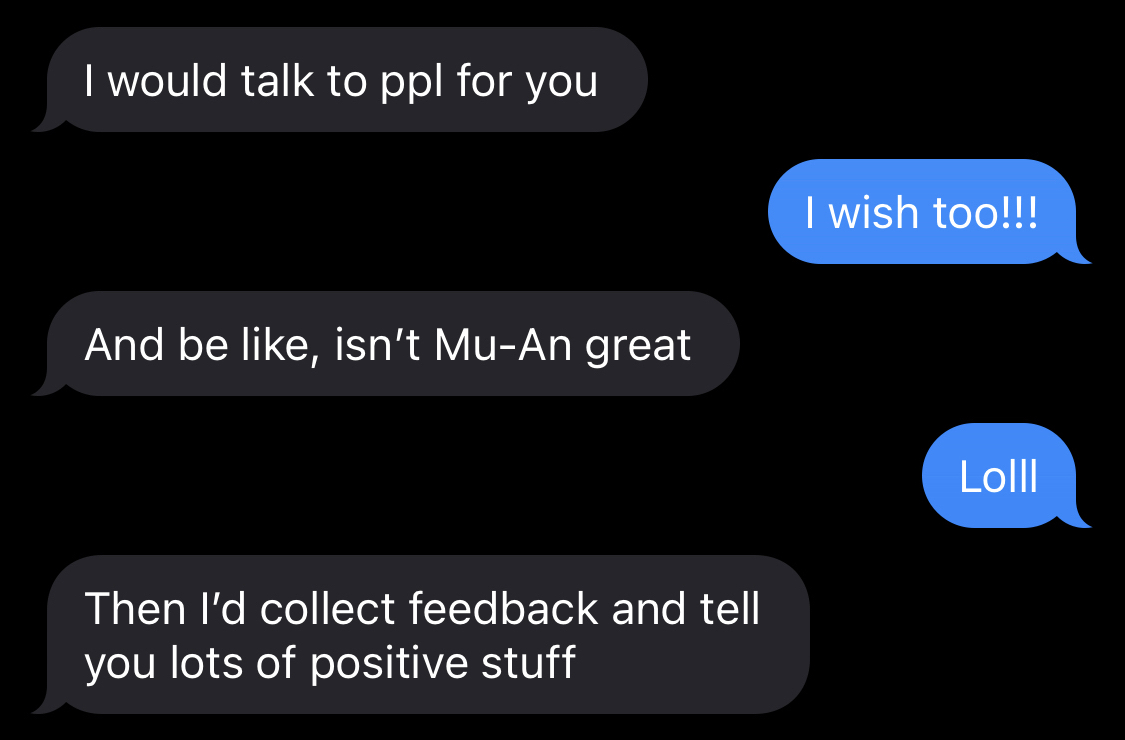 I hosted a party I didn't want to go to and my hypewoman couldn't come. 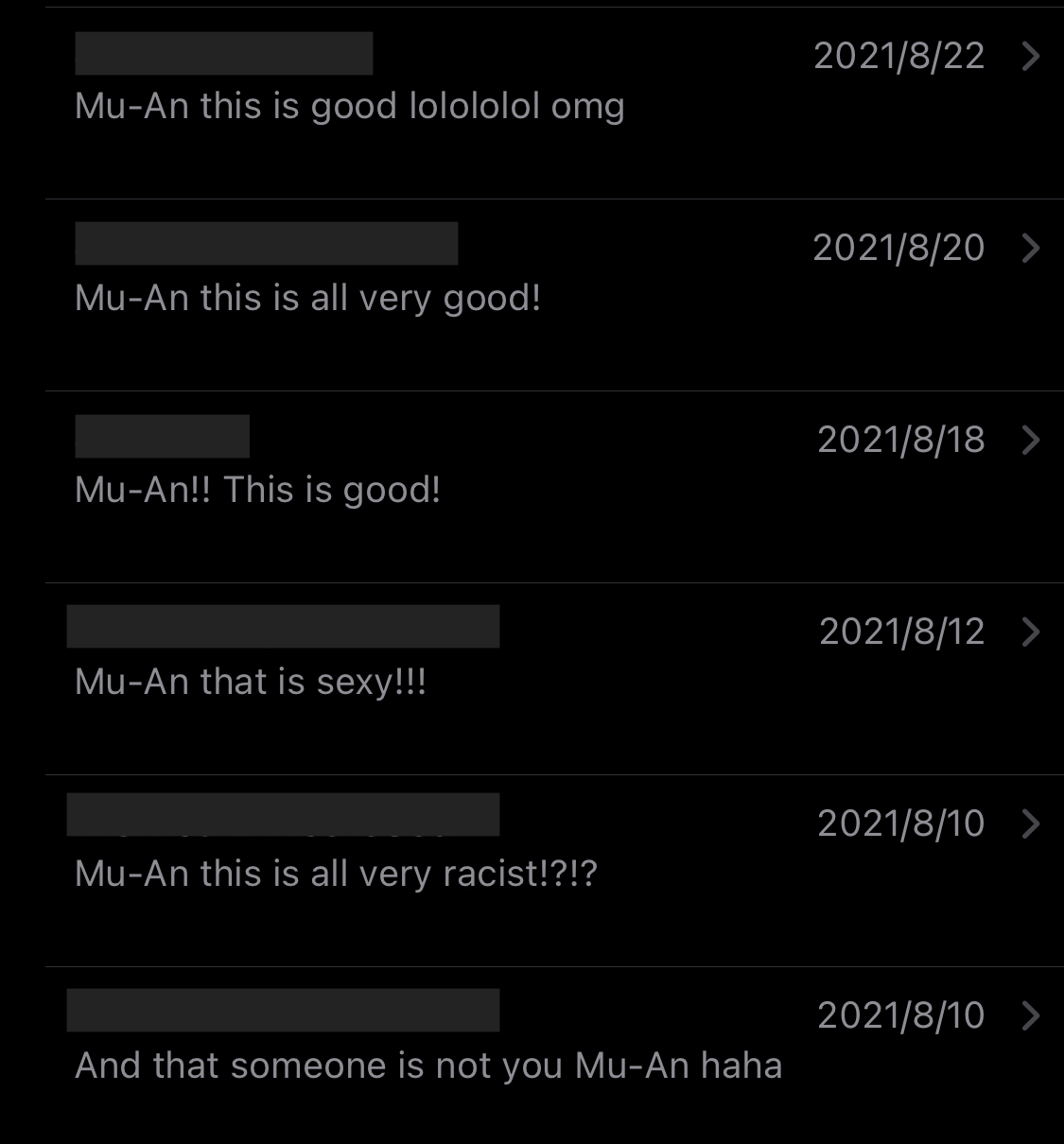 I don't know what these were about.

I will also not respect myself when I too become an elder. 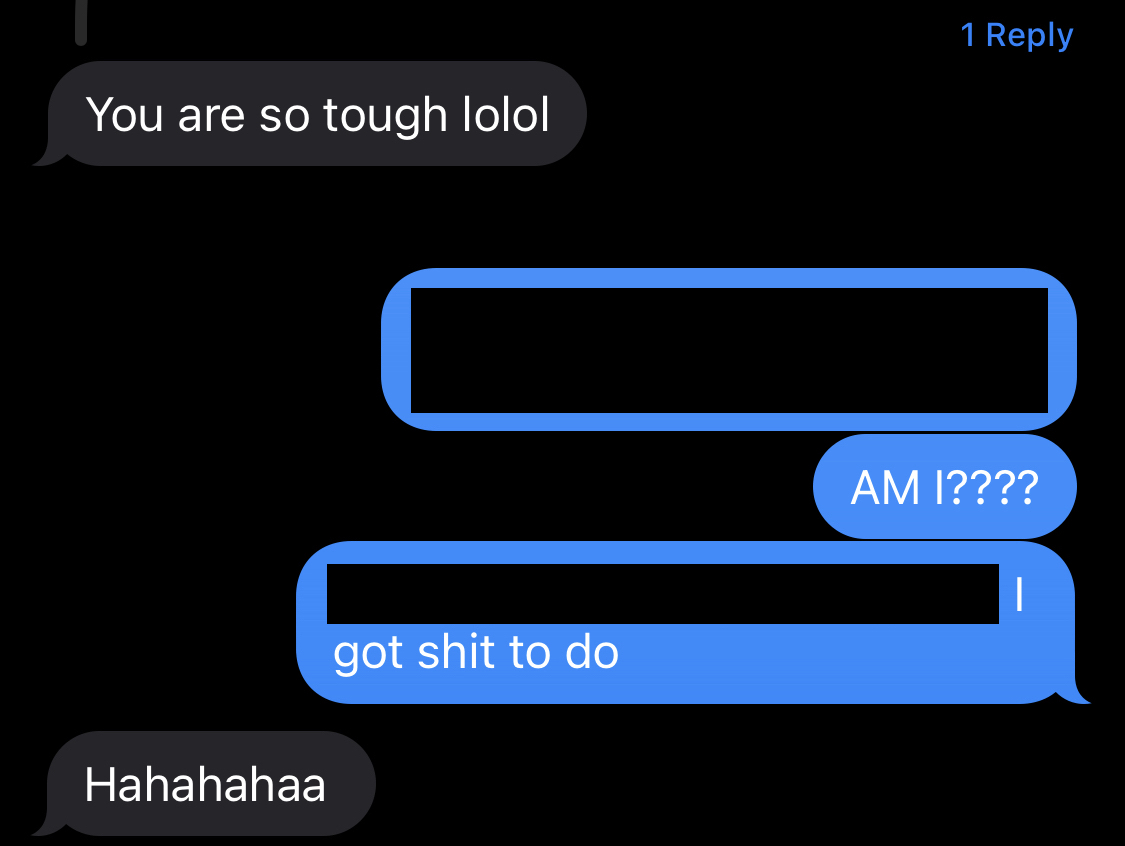 Clear communication is all.

Things my friends would say on record

Opinions expressed in this section are solely theirs, and do not express my views or opinions.

Mu-An is cool as hell. She’s lived all over the world. She speaks multiple languages. She’s hella smart and has good design sense and can cook and take care of plants. You’d be an idiot for not trying to at least talk to her.

Mu-An is the most excellent human who is smart, cynical but kind, funnier than she thinks, and you’ll never deserve.

Mu-An is so intelligent and tasteful (this website proves it), and she's freaking lovely. I can't believe she's friends with me. I always get inspired by what Mu-An does. And she's so humble despite developing these cool things! I am so grateful to have the chance to meet her. If you are thinking about reaching out to her at all, do it now. It’d be the best decision.

Mu-An's really smart, she cares about people, and she always inspires me to do things, like build cool websites or make pretzels 🥨.

Mu-An has an excellent taste in books and music, and she’s the kind of friend that will bake you a Basque Burnt Cheesecake because you’ve never had one before.

There is no one quite like Mu-An. These are words I would use to describe her: prolific, insightful, funny, smart, DESIGN, and queen of emoji. I’m always learning from her and she understands how important it is to seek out the best duck nigiri in Taiwan. What’s not to love?

My friendship with Mu-An is almost entirely based on games, but I think that’s where people are sometimes the most authentic. In them, Mu-An makes everyone she plays with better. She creates real community and joy, and it sucks when she's not around. 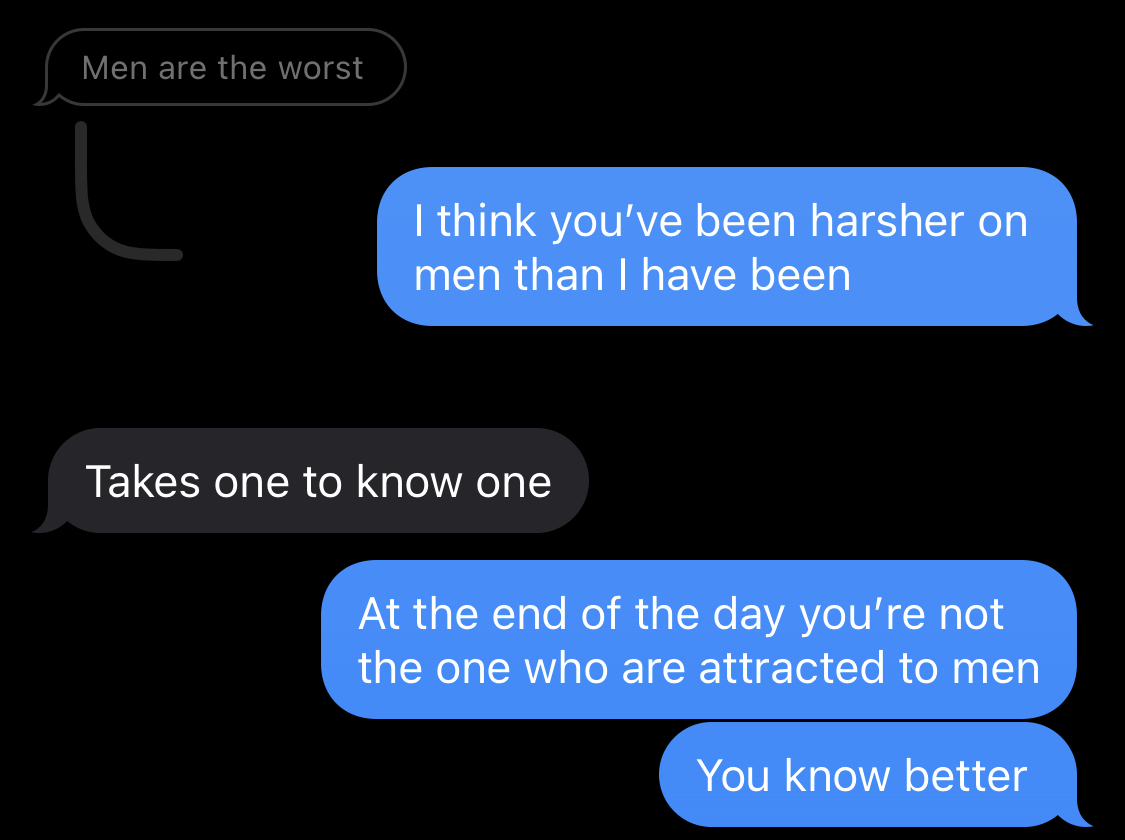 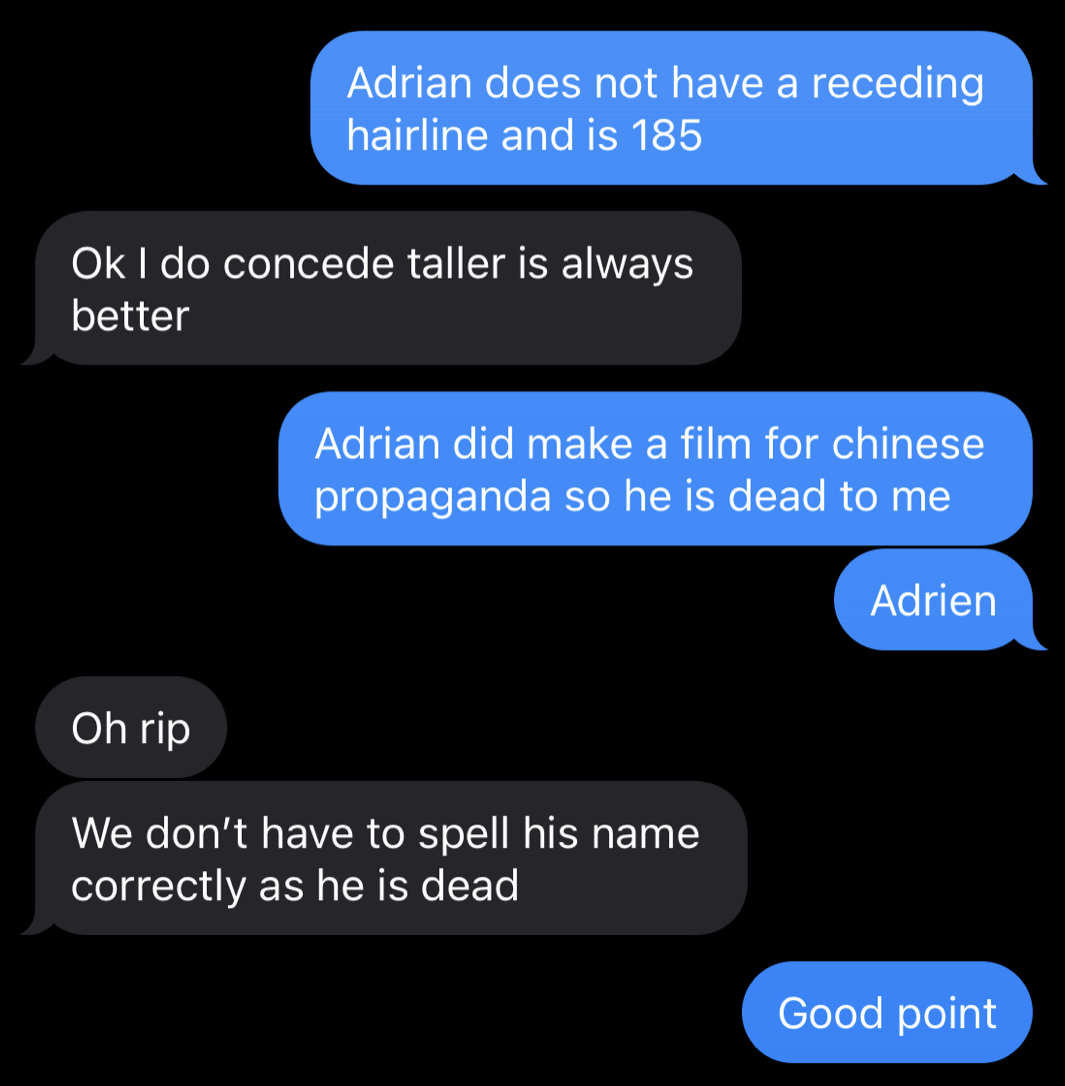 Not having made a Chinese propaganda film preferred. 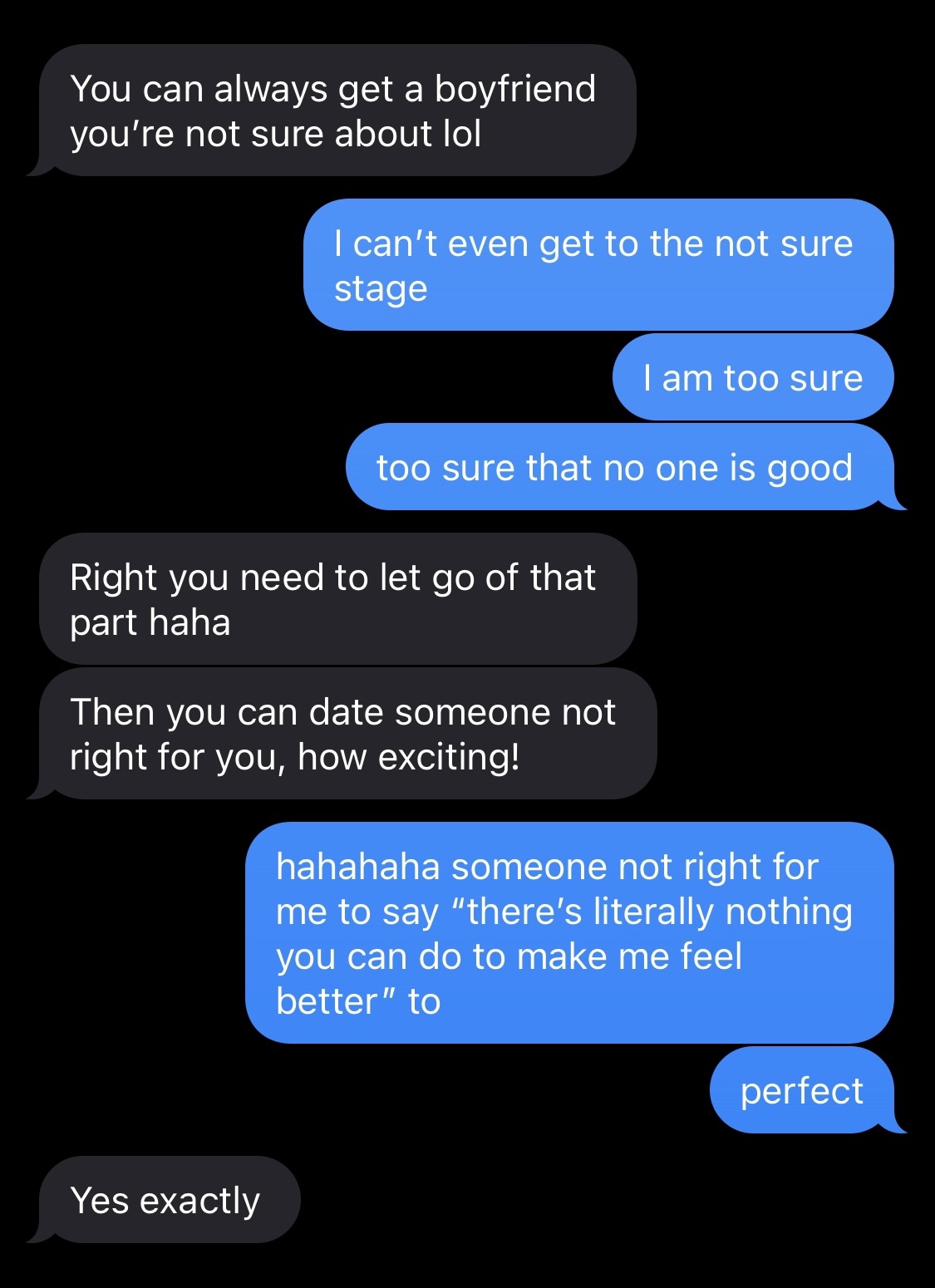 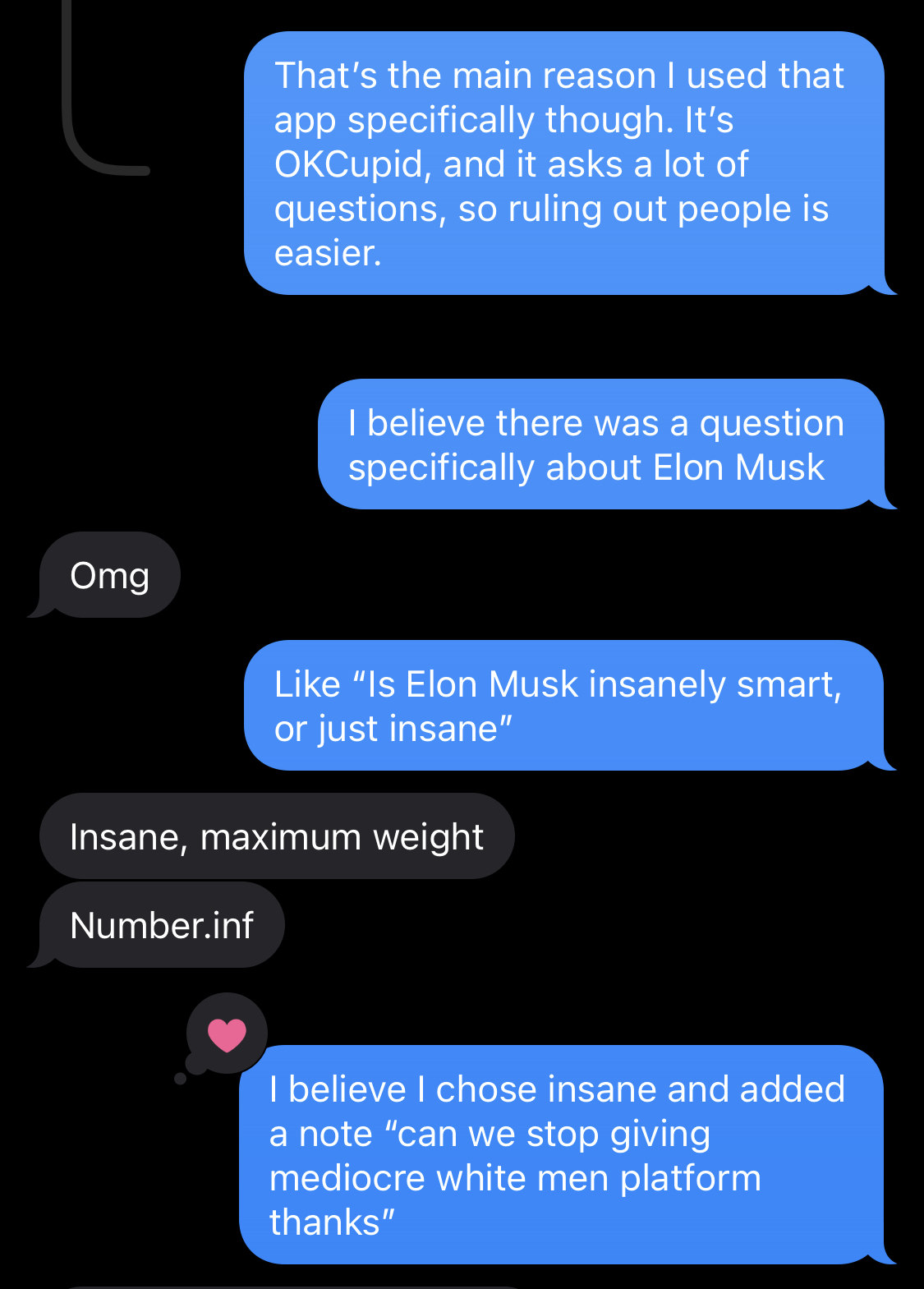 I just want to talk nerdy shit, build websites, and play some games.

y'all got romance wrong, not me. 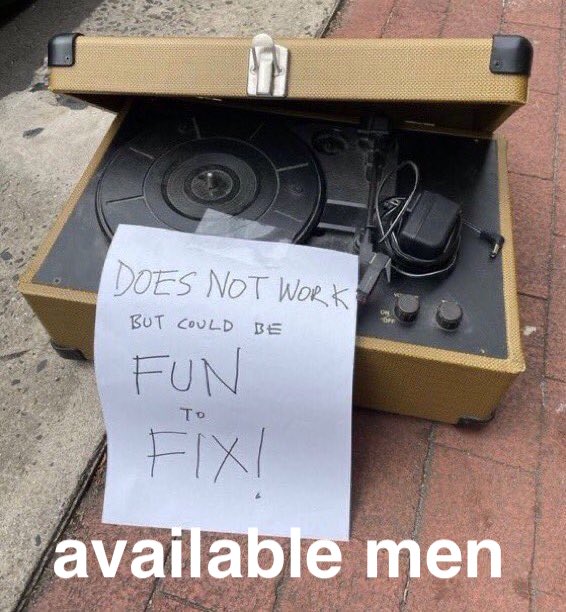 Sorry, no time. Me broken too. 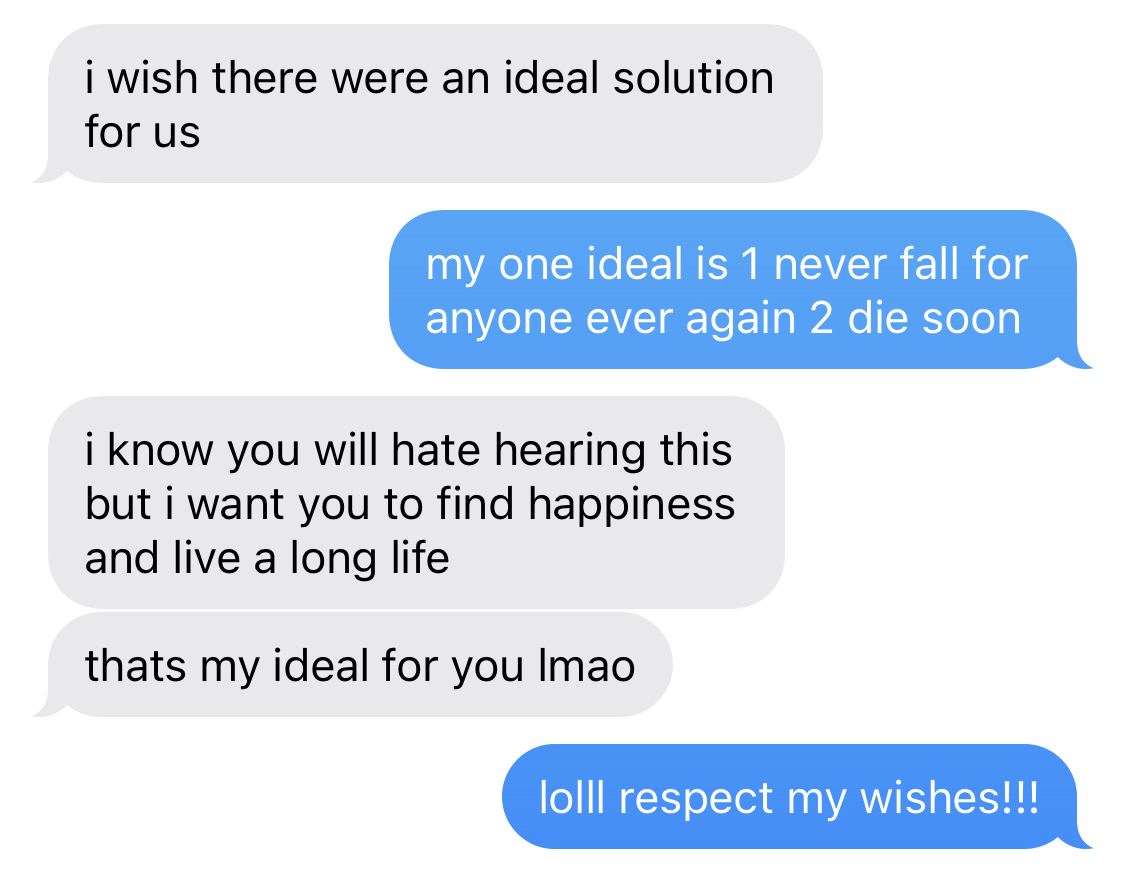 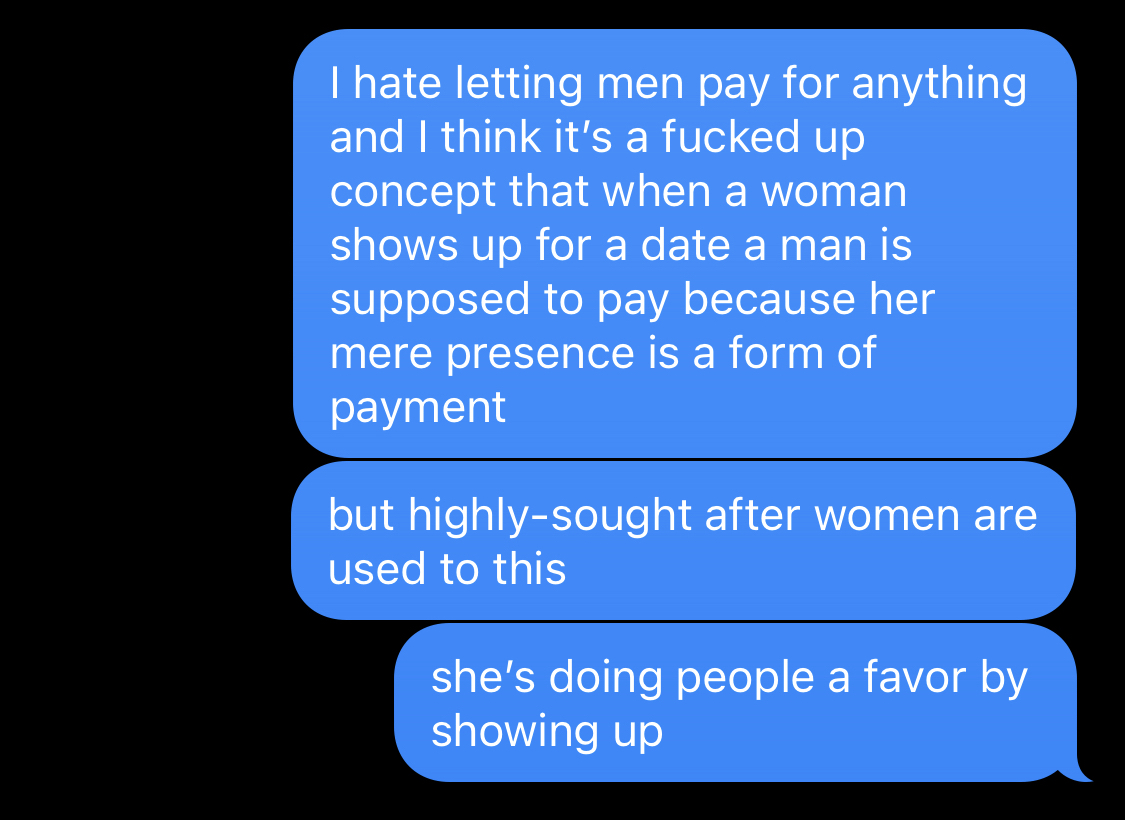 We should be equals, FYI. 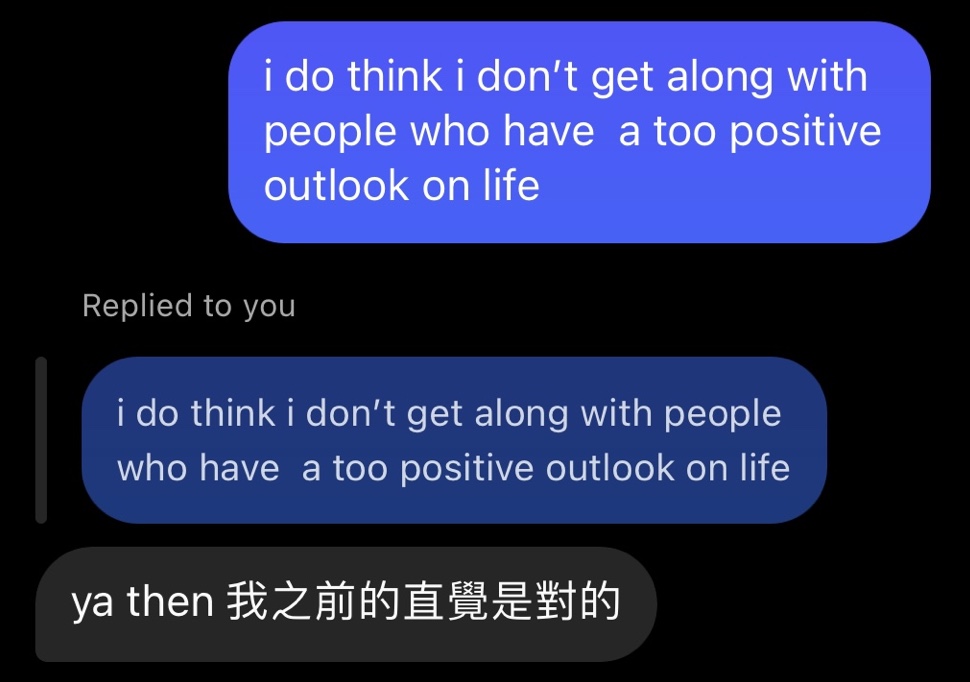 I also get along better with people who don't like their family members.

I'd prefer to not hate myself, FYI.

It's a simple yes or no.

When they are things involving showing up for people… Honesty counts for something?

Let's leave it at that.